A MORNING WITH THE WOLVES OF YELLOWSTONE

Wolves! They are one of Yellowstone’s most iconic species and something we are always on the lookout for during any trip to the park, especially during the Winter season. We certainly don’t see them on every visit and most encounters are fleeting. Following, is the story of one of our most epic encounters… so far!

Our group entered the park an hour before dawn, hoping to be at the Midway Geyser Basin for sunrise. The day was clear and cold – temperatures were sub-zero with heavy fog, especially in the thermal areas. We were headed to Midway because we heard the Wapitis had been in the area. The Wapitis are one of Yellowstone’s most iconic and famous wolf packs. As we paused to check out “the bobby socks trees” (a great landscape location), another snowcoach driver stopped to let us know they had just seen wolves cross the road South of our location! We all quickly piled back into our snowcoach and headed down the road.

Thanks to a fresh dusting of snow, our guide and snowcoach driver extraordinaire, David “Shaggy” Martin and I were able to locate wolf tracks where the wolves had crossed the road near the Fairy Falls pullout. From the tracks we could see that the wolves were travelling North. We made a few passes back and forth along the road searching for the wolves or fresh sign. After a bit, we found some more tracks further north. The wolves were headed away from the road but still on our side of the Firehole River. This meant they were between us and the river! Thinking they most likely would not cross the river, we decided to head to Fountain Flats, an open area further North where we hoped the wolves would appear next.

As we arrived at the Flats, we found it completely socked in with heavy fog. Visibility was only 20-30 yards and unfortunately, there were no Wolves… YET! There was, however, a herd of frosty Bison in the fog for us to photograph while we waited. After about half an hour of great Bison photography, I walked over to consult with Shaggy to see if he thought we should make another pass along the road to search for the wolves. As we talked, he looked up and pointed over my shoulder and asked, “you wanna search for THOSE WOLVES?” I turned to see a wolf slowly materialize out of the fog and then we all watched as a dozen wolves magically emerged from the mist! Interestingly, Shaggy asked if Nicole and I wanted to have this be a private wolf encounter for just our group or if we wanted him to let other tours in the area know about our find? Of course, we decided to share the wolves with anyone else who happened to be around, so Shaggy told folks over the radio. 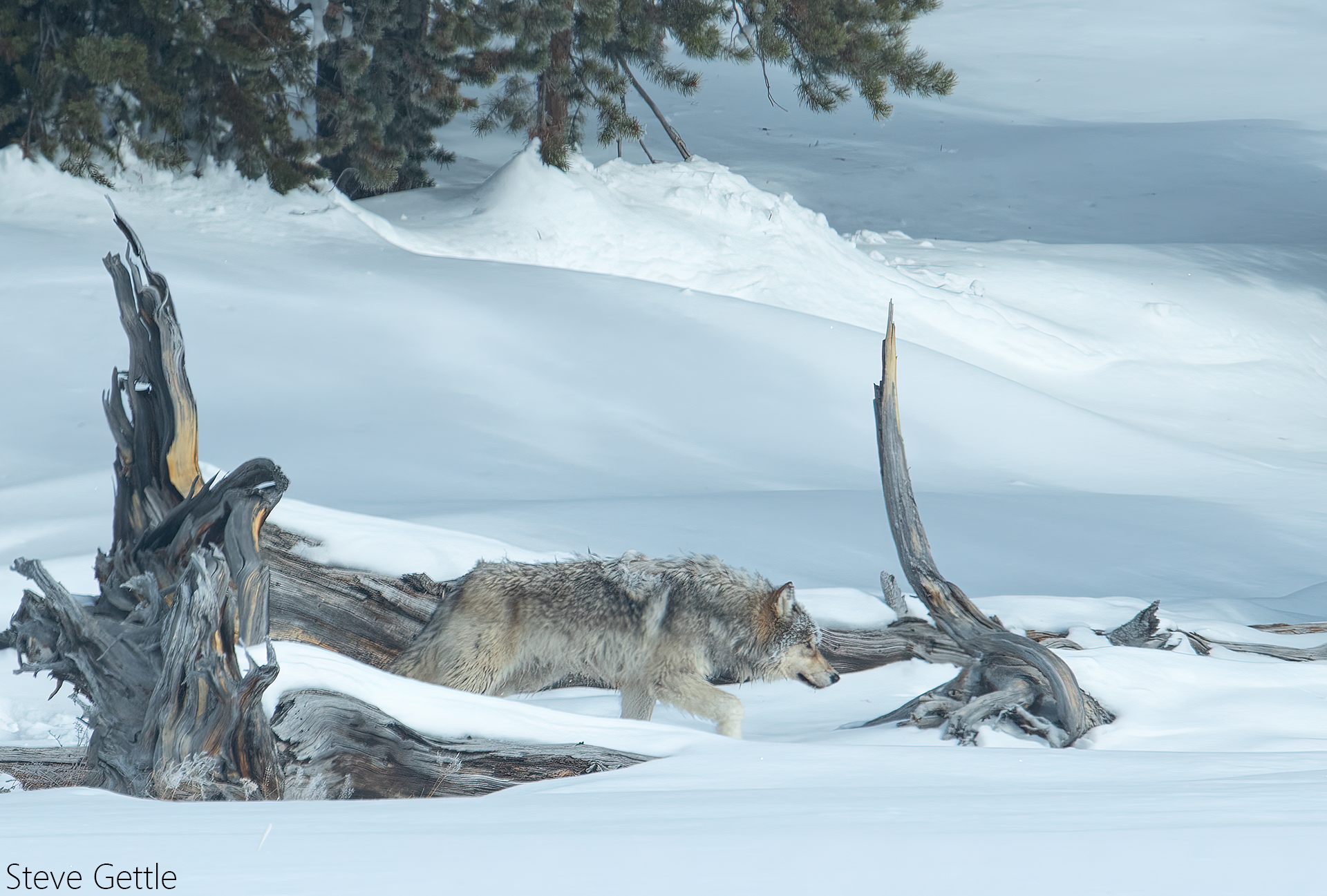 We hoped the wolves might make an attempt at the Bison we had been photographing but the herd was on alert and had bunched up into a defensive huddle with all the youngsters and vulnerable protected in the center. The wolves wisely decided to move on in search of easier prey. As they did, they passed right in front of us. I can tell you that many images were made as a dozen wolves floated across the frosty landscape right in front of us! It was a wonderful encounter, and we were giddy with excitement about the images we had just made as we all climbed back aboard our snowcoach. It had been an amazing encounter and would have been the highlight of any trip to Yellowstone! But little did we know that our morning with the wolves was not over yet! 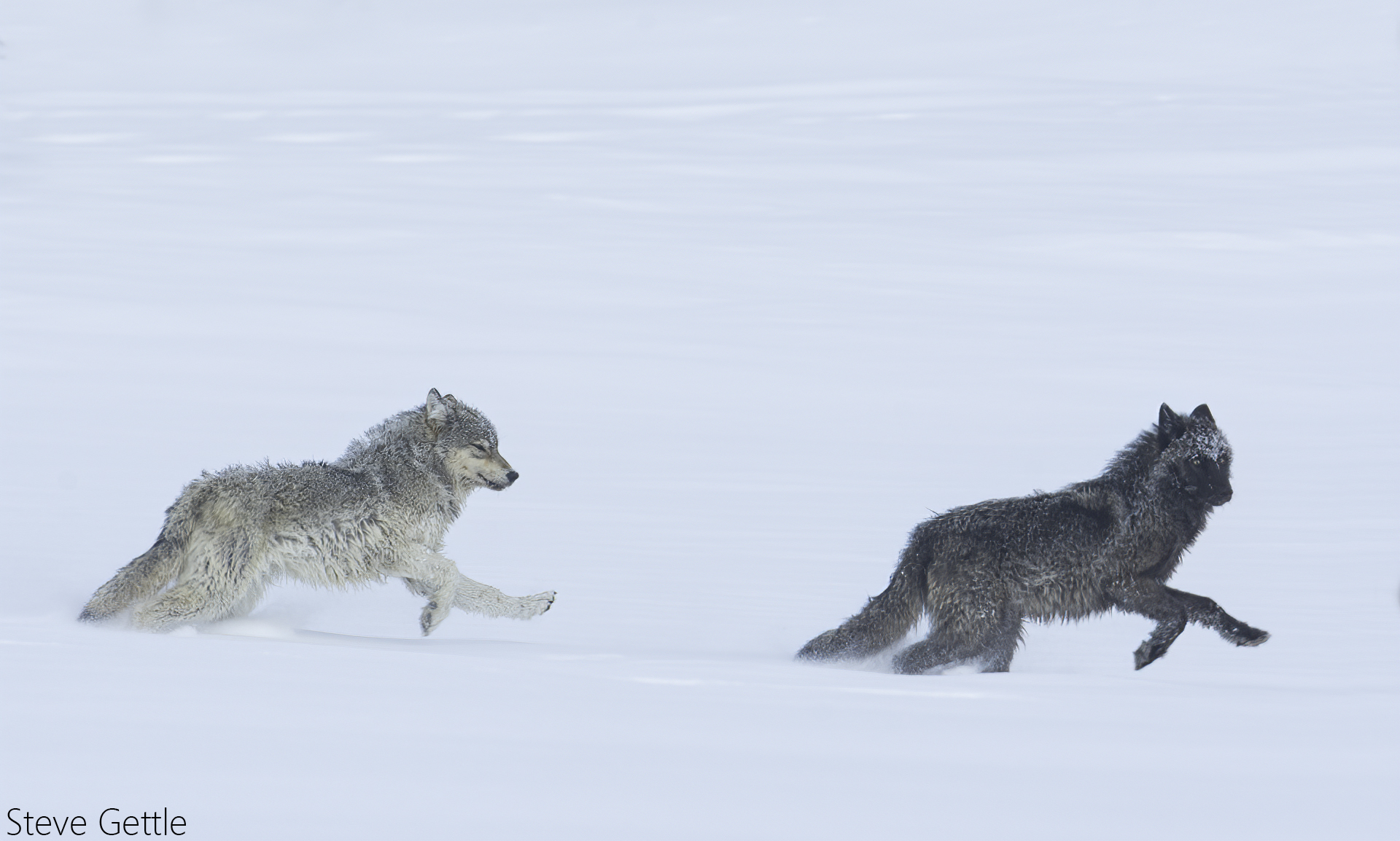 As Shaggy turned the coach to head back down the road I looked toward the draw where the wolves had just disappeared and saw another herd of bison thundering toward us? I shouted, “THEY’RE COMING BACK!” Shaggy threw open the door and exclaimed, “EVERYBODY GET THE HELL OFF MY COACH”.

We all piled out and threw our cameras to our eyes and started making images as a herd of about a dozen bison stampeded toward us with a pack of hungry wolves hot on their heels! One young Bison fell behind and the wolves quickly cut it out from the rest of the herd. As the chase drew closer, we were very happy to have zoom lenses so we could zoom in and isolate the action as this epic life and death struggle played itself out right in front of us all! 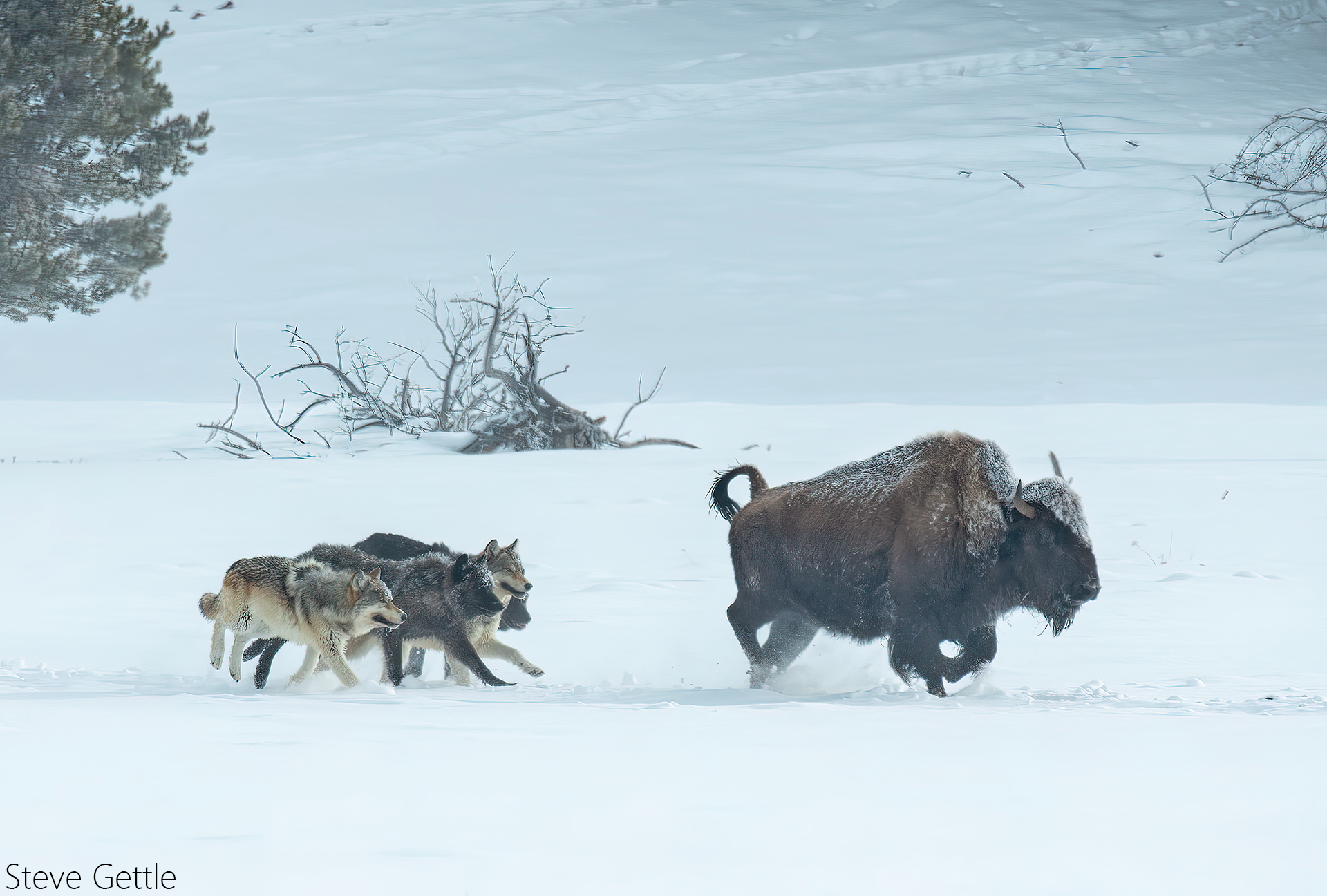 As the chase continued the wolves seemed to tire and the young bison appeared even more energized as it saw the relative safety of the main herd – the very same herd that we had been photographing on the Flats just a little while ago! At that point the wolves decided to break off the chase. The young bison was quickly swallowed up by the larger, protective, main herd. The defeated wolves milled about a bit amongst the bison perhaps hoping to find another target. Once they caught their breath and accepted their defeat, they crossed right in front of us once again for yet another epic photo shoot.

It was an amazing experience for everyone! The final image I made was of the last three wolves as they walked back through the draw on there way to Hayden Valley. 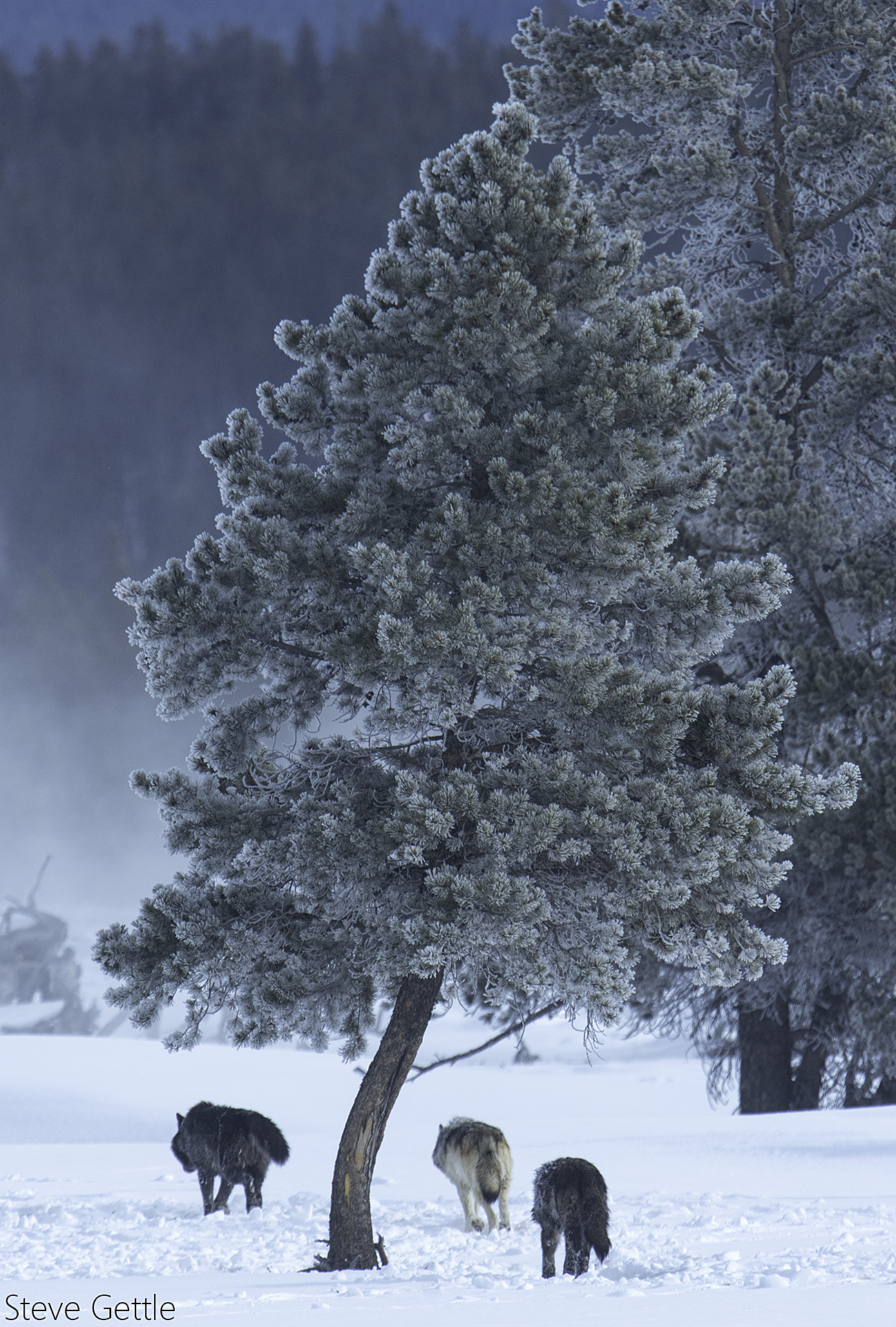 If you would like to join us for an epic Yellowstone adventure check out our Workshops and Photo Tours page We still have a few opening on our recently announced 2023 trip send us an email if you would like us to hold a spot for you!