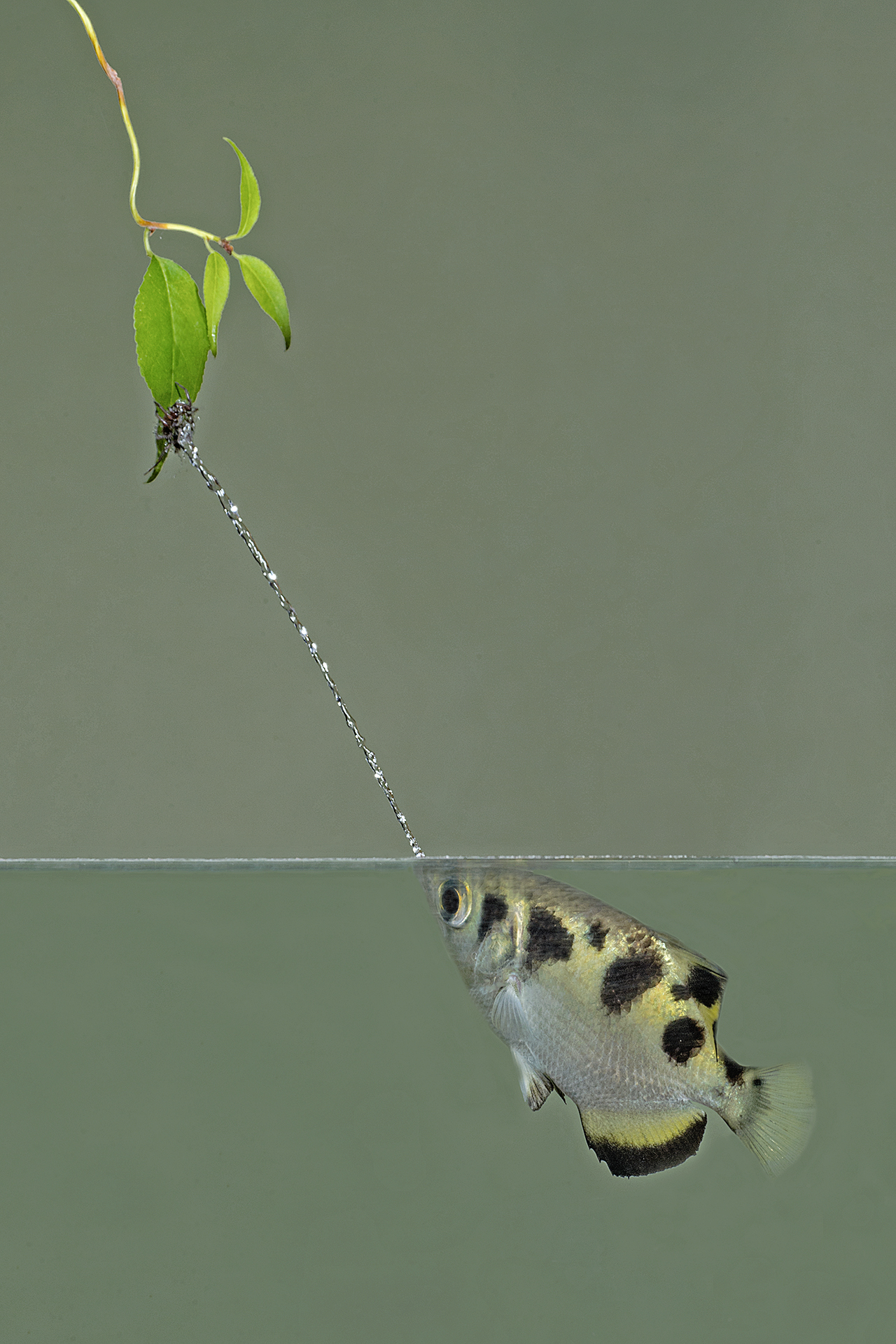 This is is the Archerfish from Asia. These amazing fish have the unusual habit of feeding on land-based insects. Even more unique is their method of hunting their chosen prey. They spit a powerful jet of water at their dinner knocking it from overhanging foliage into the water, where the fish quickly gobbles them up! Of course I decided, this is something I needed to photograph using high speed flash, and so began a two-month long project. 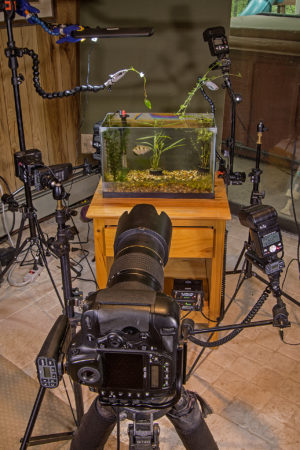 First I needed to set up an aquarium. Once the fish was settled into its new home the process of training began. I started by adding a terrarium-like extension above the tank where I could release insects for it to feed upon using its natural abilities. Then I slowly removed pieces of vegetation until there was just one sprig left. The fish quickly learned that when he saw my hands in that area, dinner was being served. Turns out that was the easy part!
The photography proved to be quite a bit more difficult.

For lighting I used four Nikon SB-600s dialed down to 1/16th power giving me an effective shutter speed of 1/11,000 of a second. Two lights were aimed at the fish and I used two lights for the background. I was hoping that I could use a laser trigger system to fire the camera but it turns out the fish would come at the prey from many different angles. Which of course made it impossible for me to know where to place the beam. This meant I had to hand fire the camera and the timing would be critical.

I had my flashes powered by external battery packs and with them dialed down to 1/16th power I could fire off 6 to 8 frames at 10 frames per second, before the flashes capacitors ran dry and needed to recharge. This would give me just over half a second window in which to capture the action. Over the course of the 50 hours I spent behind my camera trying to get the shot I saw the Archerfish fire its watery arrow maybe twenty times. I got only two frames where you could see the jet of water. The two which are included in this post. Most often I fired too late. Amazingly though 8 times the action happened between frames! Now keep in mind my camera shoots at 10 frames per second, which means the entire “squirt” takes place in less than 1/10th of a second! When this would happen, I would have one frame where there was nothing and in the very next frame there would be a few drops of water and a spider in mid-air blasted from the leaf. Now that’s high speed photography!
Previous post
Photographing Flying Squirrels with High Speed Flash
Next post
Top Ten Nature Photographers in the World?