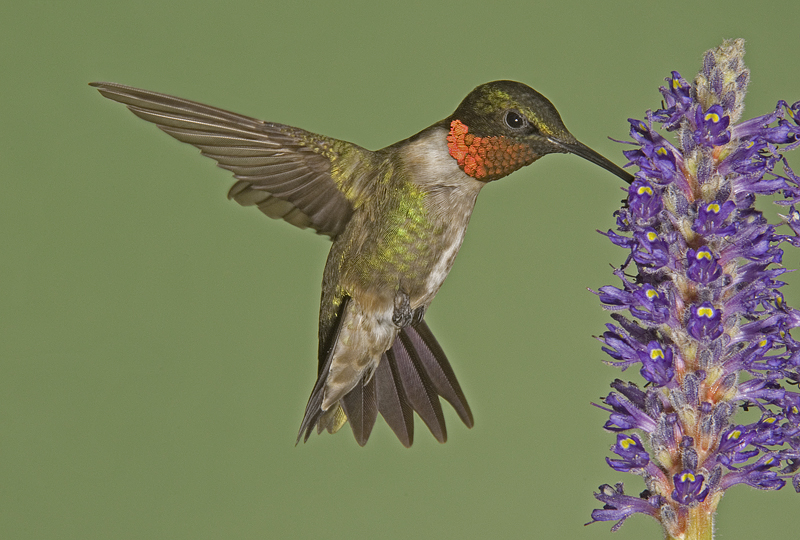 My absolute favorite way to photograph hummingbirds is to use high-speed flash to create images of the birds in flight. I like to use high-speed flash because the super-fast burst of light freezes the bird’s wings. Up until recently this type of photography was fairly inaccessible requiring specially made flashes and other equipment. Now however, most flashes have the ability to do this type of work right out of the box. The trick is to have a flash that has the ability to adjust the power down to around 1/16th power. When you do this the flash cuts power by speeding up the flash duration. I shoot Nikon SB-800s and SB-600s and at 1/16th power the flash duration is between 1/10,000 and 1/15,000 of a second. This burst of light effectively becomes the shutter speed and stops all the action.

Of course once you cut the flash to 1/16th power that significantly reduces the amount of light the flash is putting out. In order to combat this I move the flashes in closer, usually less than 24 inches. I also add extra lights. My normal setup uses 6-7 lights, 4 or 5 on the bird and two on the background. But you could get away with 3 lights, using 2 on the bird and 1 on the background. The main reason I use so many lights is to have a better chance at lighting up the iridescent plumage of these colorful birds. If the light doesn’t bounce of the iridescent plumage just right these feathers will appear as black. For a bird with a throat gorget like a Ruby-throated Hummingbird, I like to make sure I have one flash placed in front of the bird and pointing up at about a 45 degree angle.

In order to give the appearance of the bird feeding at a flower I place a flower in front of the stem of the feeder hiding it from view. You can also try using an eyedropper to place sugar water in or on your chosen flower.

Next time I’ll talk about the technical aspects of creating an image like this.
Good luck and good light!

In the spirit of “full disclosure” the image accompanying this post is digitally manipulated beyond my normal color correction and dust spotting. When the bird first arrived to feed he bumped the flower exposing the tip of the feeder behind the flower. I have used photoshop to “clone in” a flower hiding the part of the feeder that was visible.