Hey everyone I am still alive. Sorry that I have not been able to do a post for a while. But I have been travelling a lot lately, I have only been home three days in the last month. Most of that time was spent out west, where I shot Greater Sage Grouse dancing on their lek, spring bears in Yellowstone, I even hauled the floating blind out there to do some waterfowl. It was a great trip very productive, I shot over 8,000 images, photographing many subjects for the first time.

For this post I would like to share a couple of images I made late this fall. In November I made an exploratory trip down to Jasper Polaski Fish and Wildlife area in Northern Indiana. Jasper Polaski is a staging area used by sandhill cranes as they migrate south. I think it is one of the best places in the Midwest to photograph these birds in flight. The birds start to gather in late September with their numbers peaking around mid November, when there are usually between 10,000 and 15,000 birds.

As soon as the sun comes up the birds start leaving the pasture, singly and in small flocks. The birds are heading out to the surrounding farm fields to feed for the day. It took about three hours for all of the birds to leave the pasture, at which time I packed it up. I suppose I could have worked them feeding in the fields during the rest of the day, but I had somewhere else I had to be. In the evening the cycle reverses itself and you photograph the birds as they fly back into this same pasture.

I took hundreds of pictures here are a couple of my favorites. 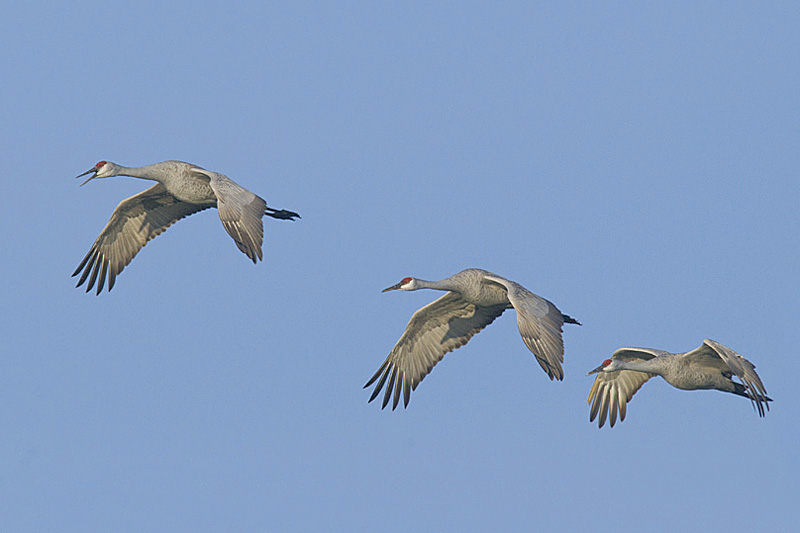