When I was in Yellowstone this past fall I did make some images of creatures other than elk. In this post I would like to share some of my favorites with you.

While I was out there one of the things that I really wanted to shoot was Mountain Bluebirds. At this time of year these beautiful birds are gathered in small flocks. If you get lucky and happen upon one of these flocks you have a pretty good chance at getting some decent images. Also one day I came upon this pair of ravens sitting together. I really love it when I can get a pair of animals lined up so they are both sharp, in the same frame, especially with such a beautiful background. 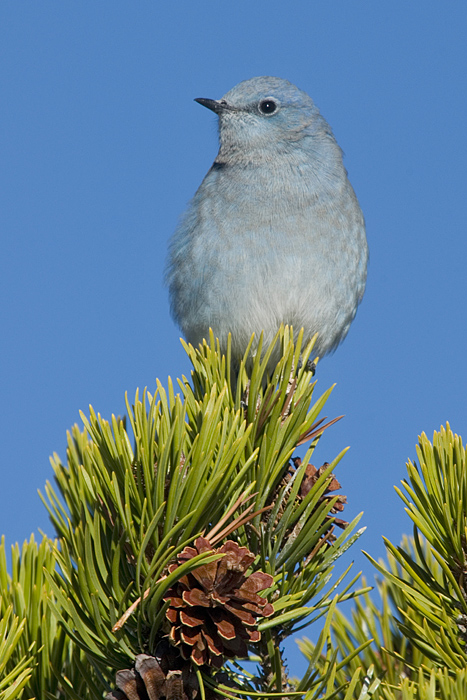 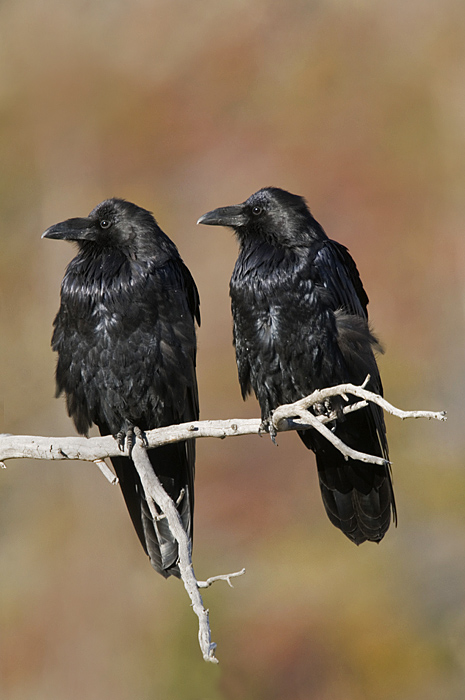 This was the year of the coyote in Yellowstone. I see coyote pretty much every time I go to Yellowstone but this year they were everywhere. I have to wonder if, due to the reintroduction of the wolves the coyote have adapted to be more active during the day when the wolves are less active. This first shot is an image of a young coyote mid-pounce. As coyotes hunt they walk along slowly listening for mice and voles in the grass ahead of them. When they locate one they will zero in on exactly where the prey is using their ears, and then pounce. As you watch a coyote work a meadow it is surprising how effective they are using this method. 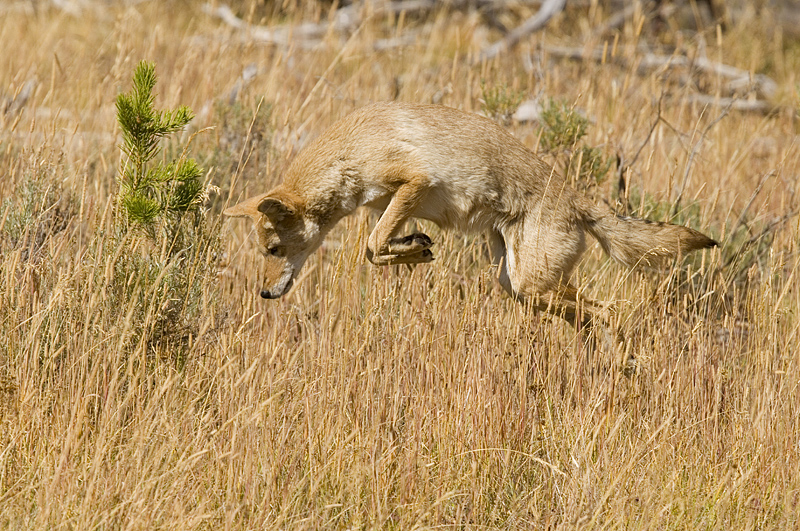 This next image is the likely outcome of such a pounce. 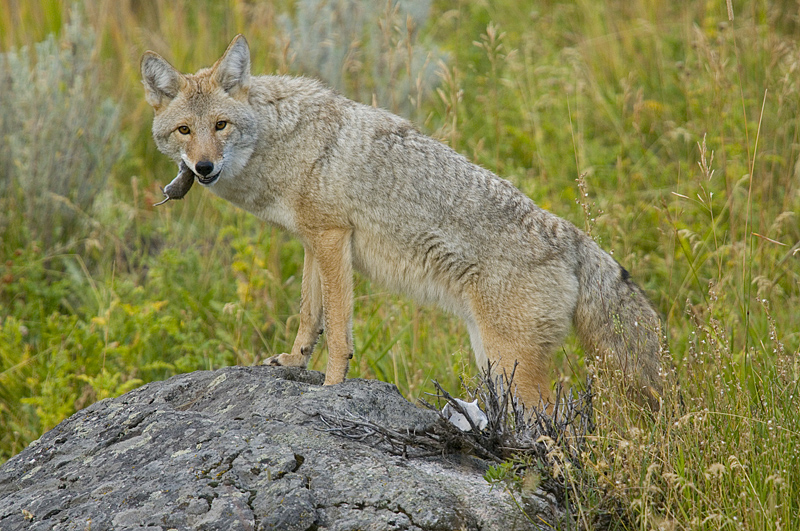 I really liked this next shot of an eagle because of the dramatic pose as he lifted off from the perch he had been sitting on for quite awhile. This vertical image is actually cropped out of a horizontal image. I liked the drama of him flying right at the viewer. The next image of an osprey was made along the Madison river. I have to say that the osprey is not as effective a hunter as the coyote. I spent about an hour with this particular bird and during that time he made about a dozen dives into the water attempting to catch a trout for lunch, none of which were successful. 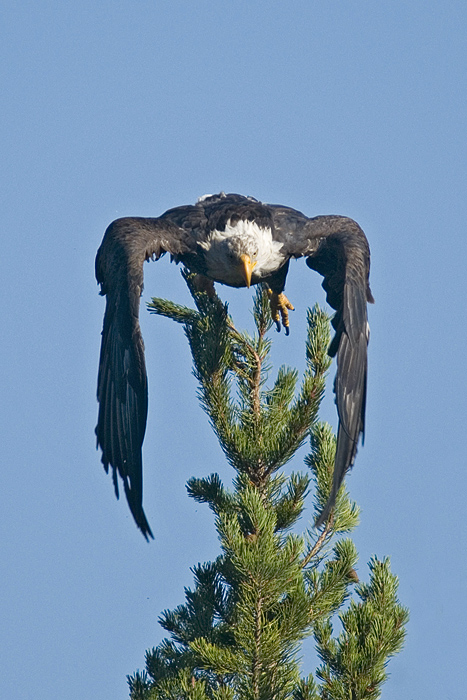 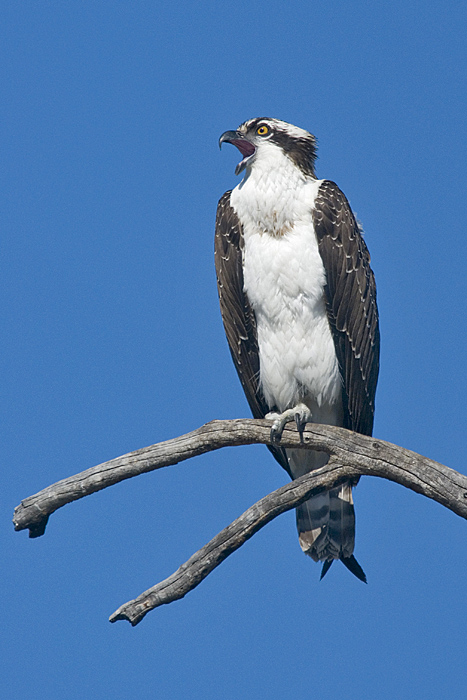 At one point myself and a couple of buddies found a small flock of Mountain Bluebirds about fifty yards off the road. Of course we grabbed our gear and headed out to photograph these birds. We spent about 45 minutes slowly working our way into position and started to photograph these birds. After awhile I turned around to discover that we had created quite a traffic jam. Everyone saw three guys off the road with giant telephoto lenses and assumed we were photographing a bear or something. Finally one of these people decided to come out and ask us where the bear was. Upon returning to the road he announced that we were ‘just photographing birds’ afterwhich, the crowd dispersed pretty quickly. 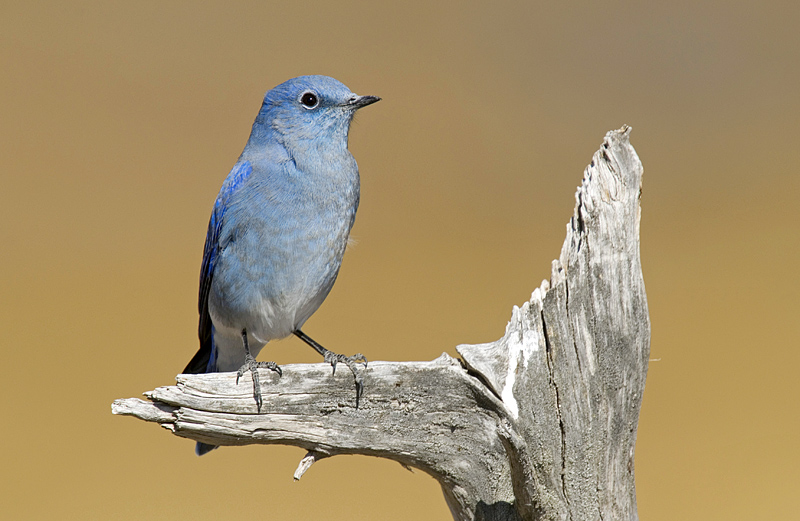 I would have this next section serve as a cautionary tale. I am often asked if I am ever scared, nervous, or whether I have ever been charged by one of my subjects. My response is that for the most part if you are careful and use a long lens and don’t push your subject, nature photography is a pretty safe pursuit. To which I always add that most animals will give you warnings, if they feel threatened by you, they will lay their ears back, or turn sideways to you, or raise their hackles, or give some other sign to let you know they are distressed. Except moose, moose give you no warnings at all they just come get you. Knowing this I was photographing this particular moose in Yellowstone with a 600mm lens so I was about 60 or 70 yards away from him. In fact there were many “foolish” photographers that were much closer to this bull moose, the truth is I was about the farthest photographer from the moose. I was photographing him as he worked his way along a small river. When he chose to stop at a most unfortunate spot, behind a small rise that was blocking half his body. He just needed to take two more steps and he would be in a perfect spot.  Well since it was mating season for moose I decided to try out my cow moose in heat call, one small bellow (I only needed him to take two steps after all).  Bad decision!  This poor fellow took the bait, hook, line, and sinker, and not only came around the rise but came around it at a steady jog, directly at me.  Well, I am over half a football field away so, no problem, I step around from the back of my tripod, which of course, is the universal signal for, HEY, I am a human being go away.  Apparently this particular moose was not aware of this universal signal, and it only seemed to anger him that I was not the cow moose that had just given him the female moose equivalent of “hey there big boy”.  His pace quickened, I looked around and realized that I was in the middle of a treeless meadow so, no problem, he was still a long distance away (but closing fast) I gathered up my tripod legs threw my rig over my shoulder and started to back away and move slowly to the left in a very non-threatening way (all the while trying not to look like a female moose in heat).  Well much to my surprise, and distress he turned and followed me, ignoring all of the much closer “foolish” photographers.

At this point I decided that there were two possible things going through poor lovesick Bullwinkle’s head. Option 1, he knew that I had fooled him and wanted to take his frustrations out on well… me. Option 2, was that this moose was legally blind, and my cow moose in heat call was far better than I had ever imagined, and this poor fellow thought that I was in fact, a cow moose in heat. Obviously, both of these scenarios were less then ideal and would more than likely end poorly for me. So I decided that from my perspective, the best play was to beat a hasty retreat. Which I did, post haste, towards the line of cars that had stopped to watch with great interest the exciting drama that was unfolding before them. So casting aside any sense of pride or dignity I ran, I ran hard, and I ran fast, I may have even screamed a little I am not sure, it is all kind of a blur from here on. But I remember at one point looking back and thinking that he was gaining on me faster than I was gaining on the line of cars. It was at this moment that I decided I needed to shed some weight, and I was seriously considering tossing aside my very heavy very very expensive camera, lens, and tripod, to not only shed the weight, but to possibly distract the beast. Thankfully, it was at this very moment that this raging ball of hormones decided to break off his chase and leave me alone, to gather up what little was left of my dignity, catch my breath, and go about the rest of my life. I am sure to the bitter disappointment of the gathering audience of Yellowstone visitors.

I am quite certain that floating around on you tube somewhere there is a video of me being chased by this poor lovesick moose. If you come across it please send me the link. No, check that, on second thought, I probably don’t want to see it. 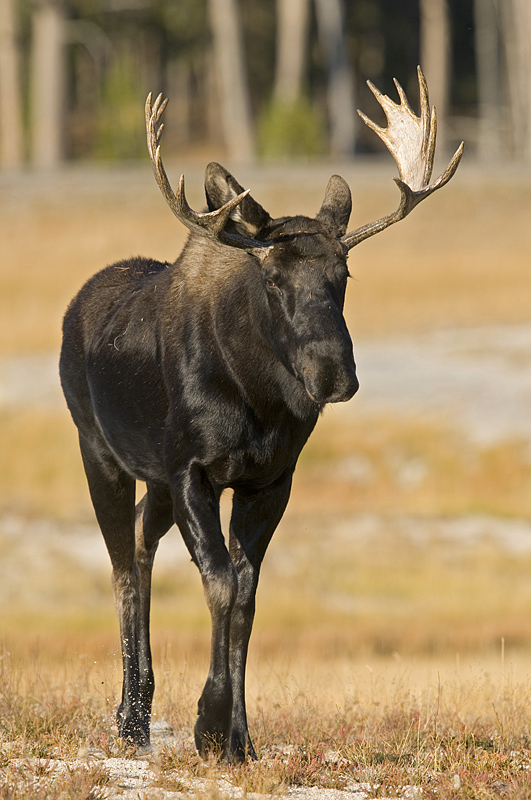