Sorry I have not been able to do a post for a while. I was gone most of September, on different photography trips. One of which was to an area I really love; Yellowstone and Teton National Parks.  I will get some of the images from that trip up in a future post.

For today’s post however, I would like to share some of the high speed flash images I made of bats in flight. I have to say that this ended up being a lot more difficult than I anticipated. I mistakenly thought this would be easy due to the fact that I was working in an indoor studio with relatively tame bats. We had a twenty foot flight cage and I naively thought that I could just build a window in the center of the cage, and photograph the bats as they flew through the window to get from one side to the other, using a camera trigger to trip the camera.  A camera trigger is a device that creates an optical beam that, when broken, fires the camera.

Well, unfortunately when we release the bats, instead of flying through the window as expected, they comfortably perched on the whichever side of the window they were released on. They simply would not fly back and forth through the window. I ended up having to build a flight tunnel to release the bats into. A flight tunnel is a square tube which has a large opening at one end (where we release the bat) and then narrows down to an opening that is just large enough for a bat to fly through. Of course, there could be no place inside the flight tunnel for the bats to perch. At the narrow end, I placed the camera trigger so that as the bats exited the tunnel, they would break the beam firing the flashes.  That’s right, I said fire the flashes (usually the trigger would fire the camera), in this case however, I had the trigger setup to fire the flashes instead of the camera. The problem with having the trigger trip the camera (instead of the flashes) is that there is a slight delay between when the beam is broken and when the shutter actually opens. During this delay a bat can fly as much as 6 or 8 inches. This makes it very difficult to predict where the bat would be when the shutter actually opens and therefore, difficult to decide where to set the focus. When the trigger fires the flash instead of the camera, the camera’s shutter is left open using the bulb setting and when the flash fires, this burst of light makes the exposure. Using this method, there is virtually no delay so I can tell exactly where the bat will be when the flash fires making the exposure. After the flashes go off, I close the shutter and prepare for the next shot. This of course must all happen in a darkened room so that I can leave the camera’s shutter open without the ambient light from the room affecting the exposure. An added bonus of working in a darkened room is that the bats are more comfortable and more active in the dark. Although, I can tell you that a couple times when a bat decided after it’s trip through the flight tunnel, that my head looked like a comfortable perch, I would have liked to have had the lights on!  It is more than a little unsettling to have a bat decide to perch on your face in almost total darkness! A note to anyone who might have an irrational fear of bats, the bats I was photographed were mostly hand raised by people and therefore did not have their natural fear of humans. A wild bat would never attempt to perch on your face!

Here are a few of my favorite images that I was able to make. 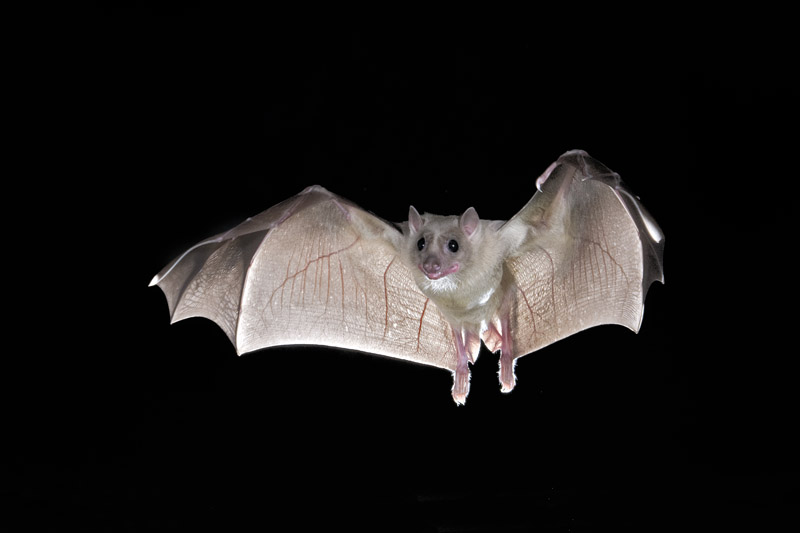 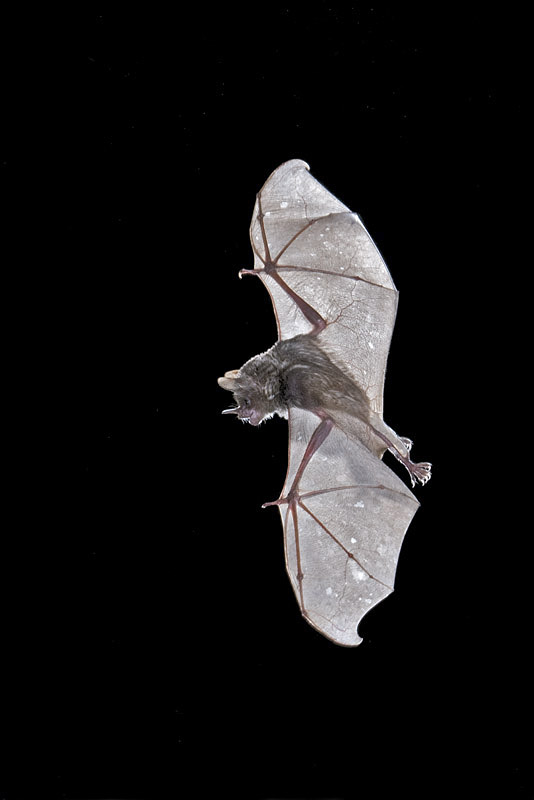 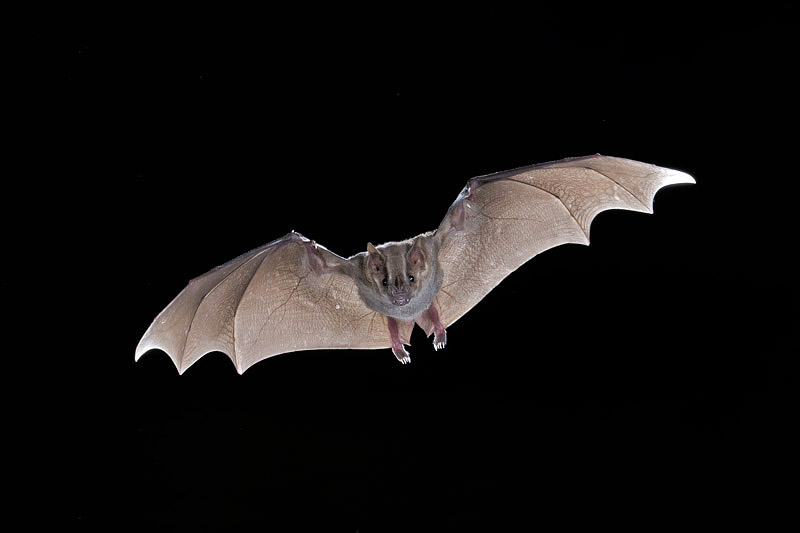 In the next image just by chance, two bats happened to fly through the opening at the same time. The bat on top is a macro bat these usually larger bats use their eyesite more that echolocation to get around. The bat on the bottom has it’s mouth open actively using echolocation. 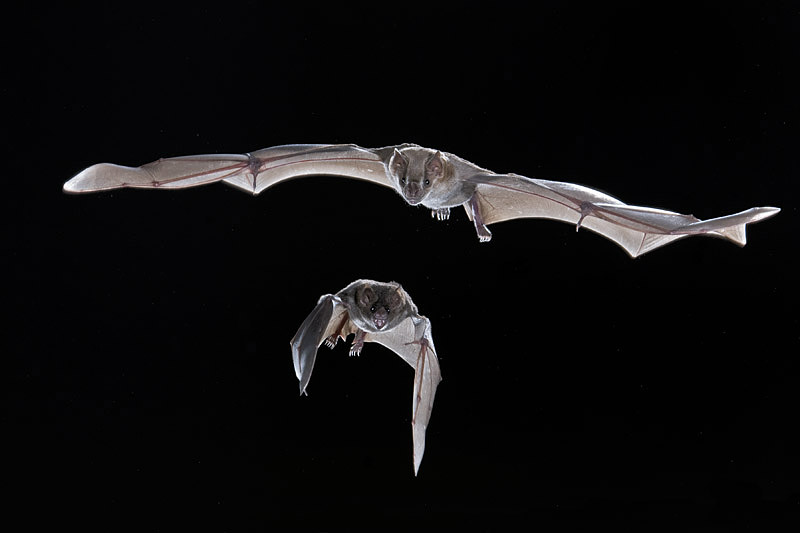 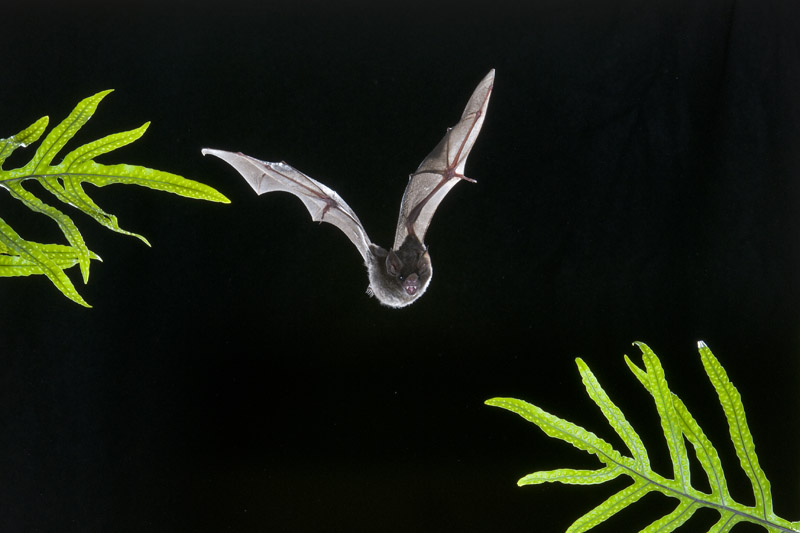 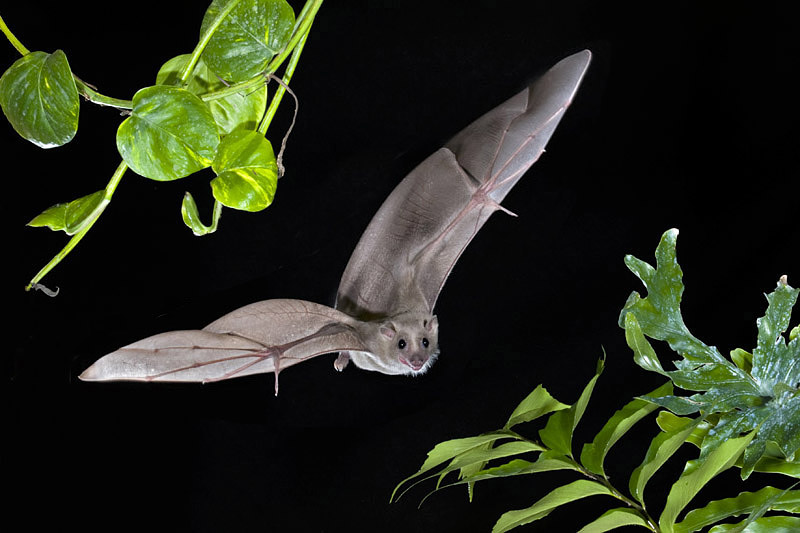