I have to say the Galapagos Islands is nature photography Nirvana. It really was unlike anything I had experienced before.  I have been blessed on many occasions to have many of my subject’s accept me as part of their natural world, but that has typically come after many hours, days, weeks, months, or even years spent earning my subject’s trust.  On the Galapagos Islands, the animals for the most part accept you the moment you step on shore.  I had a friend tell me before I left that it was like going to the zoo and being behind the bars. Having experienced it I would have to say his description was accurate.

I went with a geat group sixteen other people either photographers or spouses of photographers, many of which knew each other.  We chartered the whole boat and had our own guide.  This was absolutely the best way to do this, because we had total control of our schedule. We were able to get on the islands at first light for our morning shoots and stay until sunset for our evening shoots.  In fact, the few times we saw other groups of people on the islands they were just arriving at 10 or 11am when we were on our way back to our boat after having shot all morning.  Not only are most animals less active during the middle of the day but, being on the equator the light gets harsh very quickly after sunrise, unless you have some clouds to soften the light (which we often did).

On a typical day we would wake up at 5:30 a.m., have breakfast, get on the island by sunrise and shoot until around 11a.m. Then back to the boat where we would download our images, have lunch, then go out for an afternoon snorkel.  I have to say, having never been snorkeling before I really wasn’t looking forward to that aspect of the trip.  That all changed after the first dive, it was amazing. We saw all kinds of tropical fish, sharks, and even spent about a half an hour one day swimming with sea lions which was unforgettable.  Next time I go I will have a better underwater camera with me for sure.  After snorkeling, we would return to the boat, cruise to another landing or another island.  This would give us time to review the morning’s shoot, have a little siesta, if one was so inclined, and then back on an island for the evening shoot.  At sunset, we would return to the boat and have dinner. The food was very good and there was plenty of it, which was good because we really worked up an appetite.  After dinner we would usually have a cocktail (or two) on deck, and discuss our game plan for the next day.  During the night while we slept we would cruise to the next island.  We were on the islands a total of 7 days, I think we visited 9 or 10 of the islands.

One of the most charismatic birds on the islands would have to be the blue-footed boobies.  We had many opportunities to photograph their courtship ritual where the male shows off his brilliant blue feet to his prospective mate.  While they look rather ungainly on land, to see them transform into a knife as they dive in the ocean in search of fish was really something. 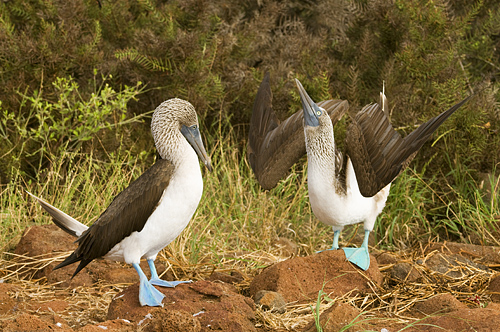 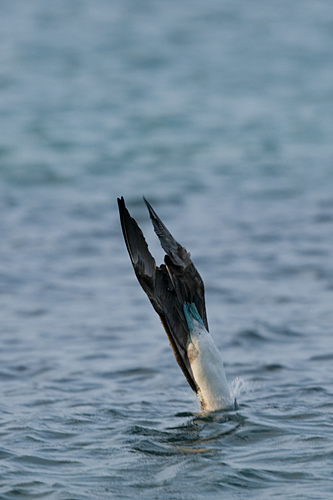 Another bird that we saw on many of the islands was the frigate bird. The male of this species builds a nest and then tries to attract a mate to the nest.  He does this by inflating his gula pouch a large red air sac on his throat.  Then as a prospective mate flies overhead, he spreads his wings and shakes his red pouch (if you are a female frigate bird “that’s hot”). 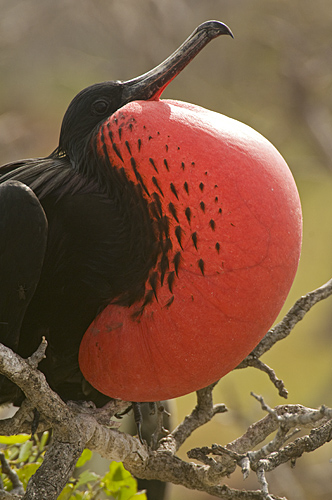 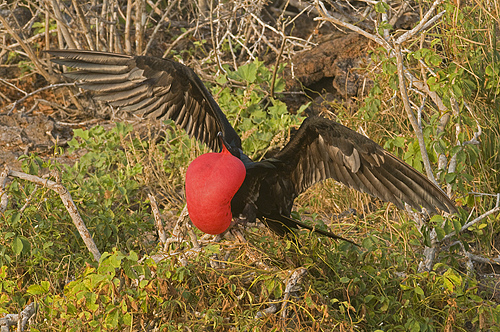 There are two types of iguana on the islands.  The marine iguana (below on the left) feed on seaweed in the ocean.  When they get too cold from being in the water, they must sun themselves to get there body temperature back up. I really liked the patterns on the rock this guy was on.  The iguana on the right is a land iguana. This particular fella looked like he had been hitting the gym, he had some great “pecs”. 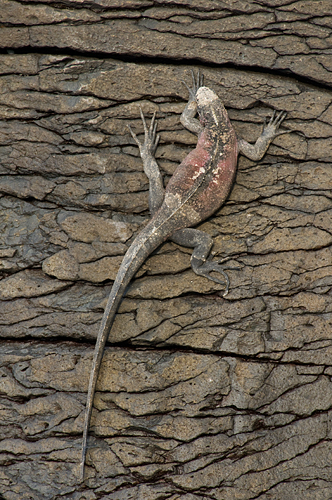 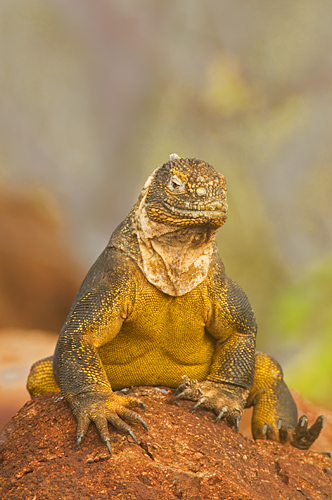 Here are a couple of portraits I liked. The first shot of a sea lion was made while the sea lion was in full sun with the background being in deep shade. I think it really calls attention to her whiskers.  The next image is of a sally light-foot crab. These beautiful crabs were everywhere. After a few days I had to force myself to stop shooting them. 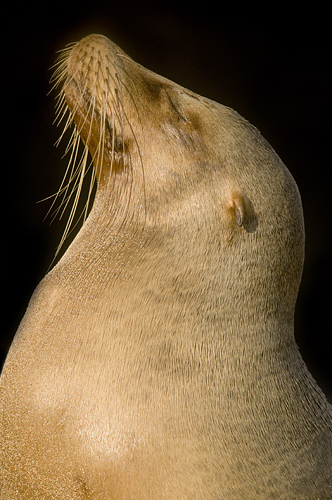 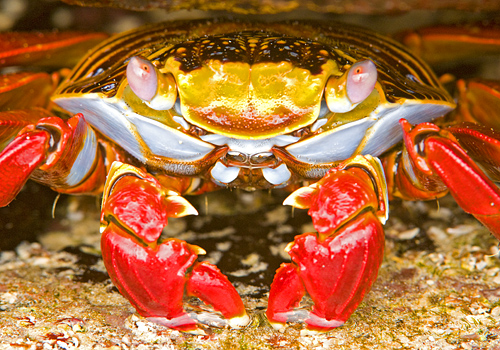 There were even a couple of birds on the islands you wouldn’t expect to see. There is a small population of flamingos on the island. The one pictured below is stretching his wings or perhaps it is some type of courtship display, I am not sure. We also saw a lot of yellow warblers similar to our yellow warblers here in the states but with a rusty brown patch on the top of there head. We were also lucky enough to be there while the waved albatross where nesting on Espanola island. With a wing span of over 7 feet they are amazing to see. We saw one take off from the edge of a cliff and he never even flapped his wings. He just spread his massive wings and fell into the wind. 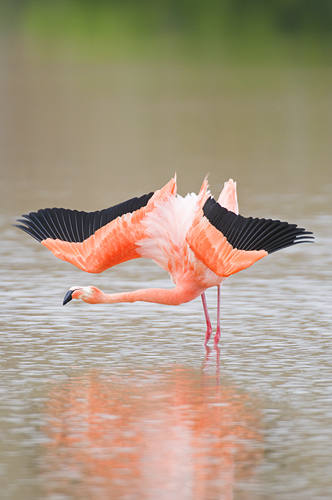 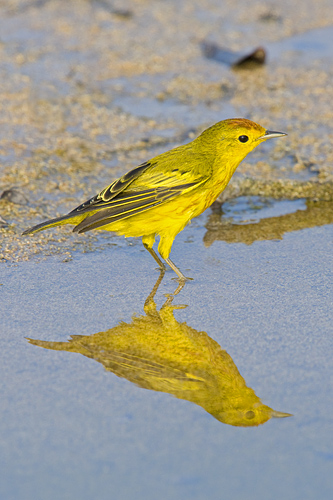 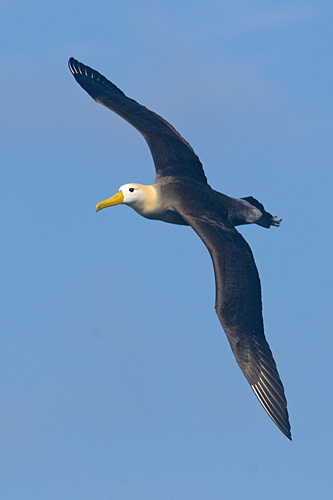 One of the more striking birds we saw was the red-billed tropic bird. These beautiful birds nest on cliffs near the ocean.  They are however, a favorite target for frigate birds. Frigate birds are also known as the pirates of the air because of their kleptoparasitic feeding behavior, which is a fancy way of saying they steal food from other birds.  The frigate birds watch for birds returning from their feeding areas with food in their gullet for their chicks. They grab these birds in mid-air causing them to disgorge the food it was bringing to it’s chick. The frigate bird then release it’s captive and chases after this tasty reward (yuck). 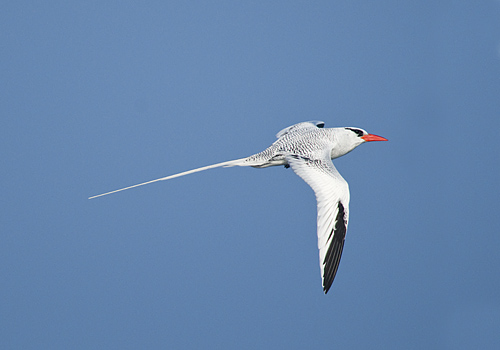 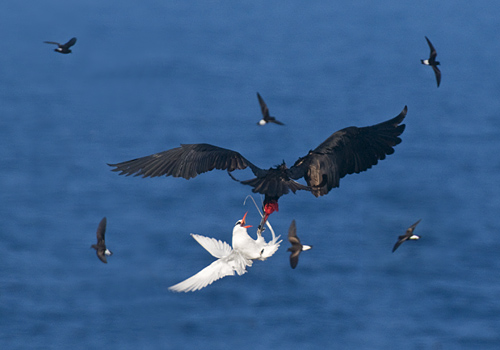 After the Galapagos, I went and shot in the cloud forests of Ecuador where I shot mostly high-speed flash photography of hummingbirds.  I will get some of those images up in my next post.